Think you've seen it all? Well on this tour we'll recreate aerial combat, with you piloting the most advanced acrobatic plane in the world. Think again! 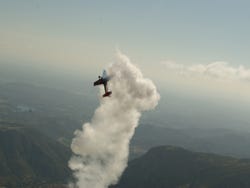 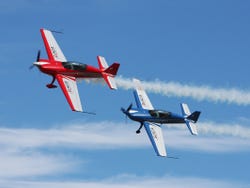 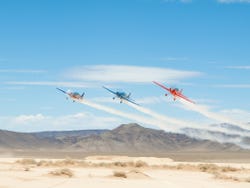 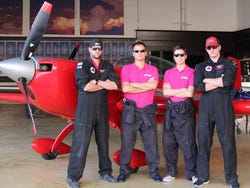 Over your 35-40 minutes in the air, you'll make manoeuvres such as loop the loops, inversions, and high G turns (up to 8.5!), vertical ascent, and much more. And the best of all: you'll be the one piloting the plane, supervised of course by a professional combat pilot.

As well as the acrobatic manoeuvres, you'll fight up to 5 combat battles, and make a low altitude pass, simulating bombardment. During the air battles you can shoot your adversary (with a laser) and the plane will emit smoke, falling in a tailspin. Totally realistic!

This wild ride is obviously only for the most intrepid!

If you feel like all that isn't enough, you can add the pack with advanced manoeuvres, including moves such as the hammerhead, the Cuban eight, or the 'abracadabra' - and you'll miss nothing: by reserving the option with advanced acrobatics the flight time is extended.

The plane for this experience is the Extra 330LC: with 330 horsepower, speeds of up to 400 km/h and certified to take up to 10G it's the most advanced aerobatic aeroplane in the world.

The plane has two seats, you sit up front, with a professional pilot behind, and it's him who will take the controls to correct any error which you might make - but don't worry - these planes are easy to fly!

The requirements for this tour are that you weigh between 36 and 122 kg (80 and 269 lbs, 5.7 and 19 stone) and be less than 1.98 metres (6 foot 5). You should have no heart problems, neck or back problems, or suffer from motion sickness. This activity is not suitable for pregnant women.

As this is an aerial combat, it should be taken by two people. If you are only one, you'll fight against an instructor flying the other plane, which will involve a supplemental charge.

The plane has 3 cameras installed, one at the front, another on the wing and a third focussed on your face. If you want the video of the experience, you can purchase it there and then.

* A reservation for one person will include a supplement.

30 to 35 minute flight in the most advanced acrobatic plane in the world.

Pilot the plane itself.

You can book up until 10 days before the activity as long as there are still places. Book now to guarantee your spot.

from
US$ 1,074
No hidden fees or surcharges
Book

Non refundable. You may not cancel this activity.
like

No rating yet
Sedona, the famous Antelope Canyon, Monument Valley... Discover the undisputed beauty in the southwestern state with this Arizona Desert Trip lasting 3 days.
US$ 590
Book
like